M2 Calls Dashboard provides live statistics about the Calls happening in the System at real time.

The report is structured in two side-by-side tables: Customers on the left and Vendors on the right. Each of the two tables include statistics for the Last Hour (from now till one hour ago) and for Today (from the beginning of the day in the viewer's Time Zone till now). For these periods aggregations such as Call Attempts, Answered Calls, ASR, ACD, and Margin are provided.

Custom cell coloring can be applied in order to visually alert about for instance the abnormalities happening with the Calls for some Customers or Vendors.

Note: Only the Calls which Hangup Cause Code IS NOT in the interval [300;312)∪(312;399] are counted as Call attempts. This is because Hangup Causes like 320 - Balance too low to make a call affect statistics such as ASR in a wrong way and DO NOT reflect the quality of the Calls. 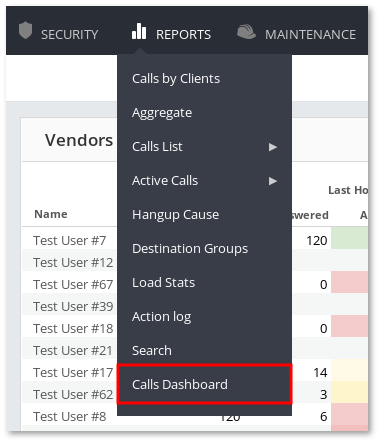 In the System Settings several adjustments can be made in order to customize the Calls Dashboard.

Note: partial coloring is also possible. For example when the ASR is set to Red < 30 and Green > is left blank, only red coloring will be present for the ASR cells.