What is a CDR Dispute?

A telecom business often faces various disputes over the inconsistency of data between the Call Detail Records (CDRs). Such data deviations include Call Price or Duration mismatches and is usually pointed out by the telecom's Suppliers/Providers or Clients. Such a phenomenon can be a result of a variety of reasons including different billing systems.

What is a CDR Dispute resolution tool provided by M2?

The CDR comparison tool automatically analyzes the Call Detail Records provided by the Clients or the Suppliers/Providers. The mechanism compares the local CDRs present in the database with the imported external CDRs and highlights the discrepancies. The result is a generated report.

First a CDR file (CSV) from the Client or the Supplier/Provider involved in a Dispute has to be retrieved. The CSV file for the current version of the CDR comparison tool should contain the following information:

IT IS IMPORTANT: Finally a CDR import template needs to be created in order to correctly import the retrieved CSV file. More on how to create a template can be found here CDR Import Templates.

A Dispute can be created by opening the BILLING > CDR > Disputes page from the System Admin's menu. 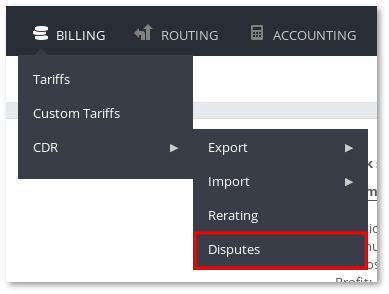 Shortly after, a list with the information about the Disputes is presented indicating the Client or the Supplier/Provider involved, the period of the CDRs compared, the differences between the imported external CDRs and the corresponding local ones, and the amounts of the compared local and external CDRs.

NOTE: Once completed a Dispute cannot be edited thus a comprehensive tooltip with a detailed Dispute information is provided.
By clicking the ADD NEW button a Dispute creation form is opened: 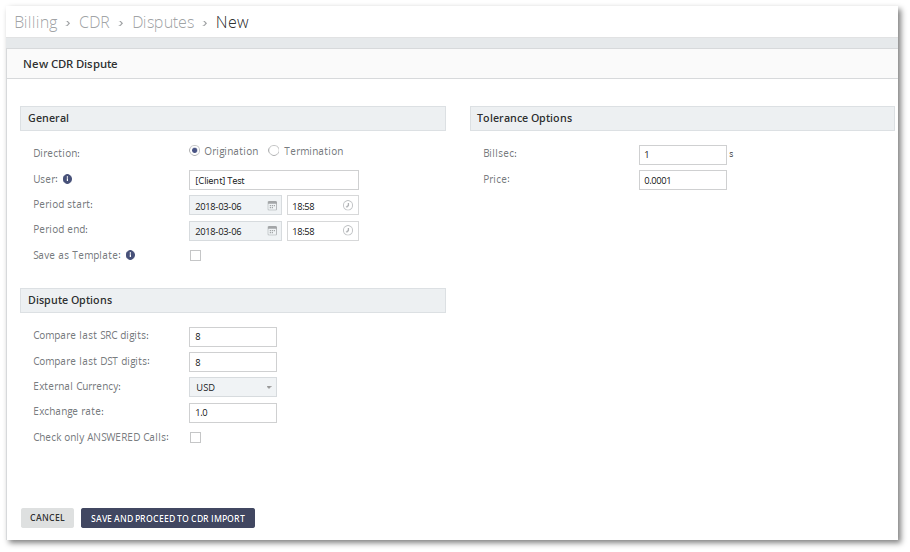 The form provides the options required by the Dispute:

By clicking the SAVE AND PROCEED TO CDR IMPORT button the Dispute is saved and the CDR import page is opened. If there were any errors during the saving procedure, messages are displayed.
NOTE: If the import procedure (described below) is interrupted or canceled, the Dispute remains editable and it is possible to perform the CDR import later when desired. Edit form is adjusted with two additional buttons IMPORT CDR and UPDATE:

After successfully saving a Dispute or from the edit from (as described above) the the next step of the CDR Dispute is create CDR Import Template.

The next step is the CDR Import where the external CDR file is uploaded:

NOTE: before proceeding make sure to read the Preparations section above.
When the system is done parsing the file it is necessary to confirm whether the template is applied correctly:

Ater the successful import the Disputes list rendered once again indicating that the Dispute is in progress. The task is run in the background thus it might take some time to be put in a queue and completed. The task progress can be monitored in the Background Tasks page.
NOTE: When in progress a Dispute can neither be edited nor deleted.

Ater the CDR Dispute is completed it is indicated in the Disputes list. It is now possible to see the Details or Delete the Dispute.
NOTES:

By clicking on a DETAILS button the Dispute Report Summary is opened (as below): 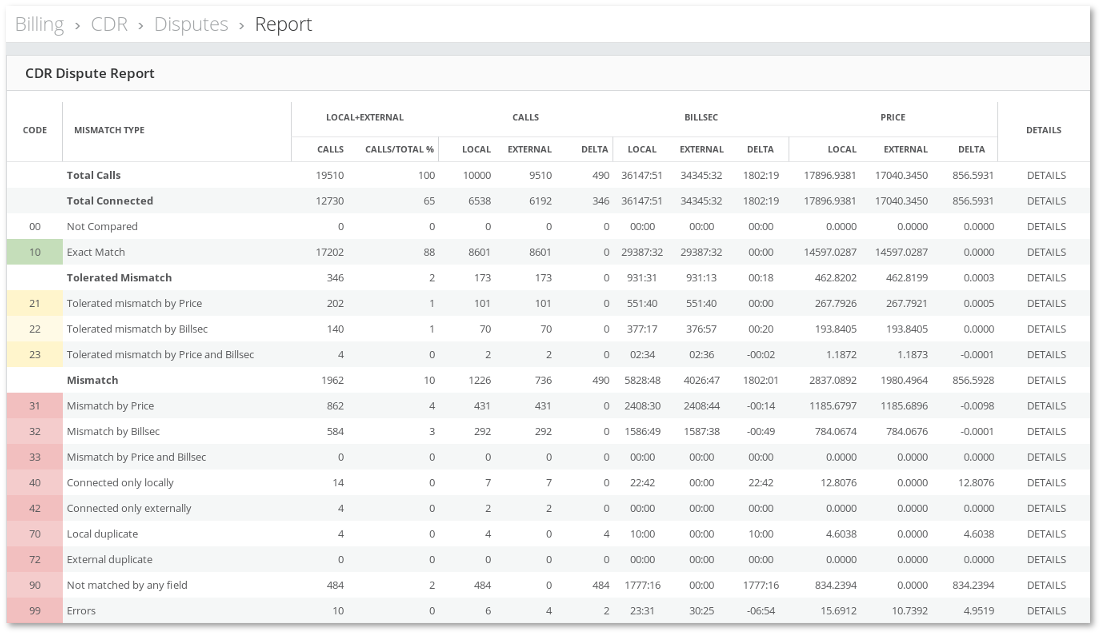 The Report Summary page is organized in columns:

Each line represents an aggregation of CDRs by the comparison result Code. Partial aggregations of several groups of Codes (e.g. Total Calls, Mismatch) are also provided in this page.
Several columns are split into aggregations for local and external sets separately together with Delta aggregations (a.k.a. differences).

By clicking on any of the DETAILS buttons in the CDR Report Summary page a Detailed CDR Dispute Report is opened. In this page it is possible to investigate specific CDRs by filtering or sorting them in a desired way.