From Kolmisoft Wiki
(Redirected from Callback)
Jump to navigationJump to search

Callback functionality comes as Addon and must be purchased separately.

From Wikipedia, the free encyclopedia
In telecommunications, a callback (also written as call-back) occurs when the originator of a call is immediately called back in a second call as a response.

In order to use a callback service, a subscriber is allocated a unique number, which must first be dialled in order to trigger a return call. This is known as a Direct Inbound Dialing (DID) number (Access Number). Where Caller ID is available, it may be possible to use the same DID number for many different subscribers, as the callback system will be able to recognize each subscriber's registered number. 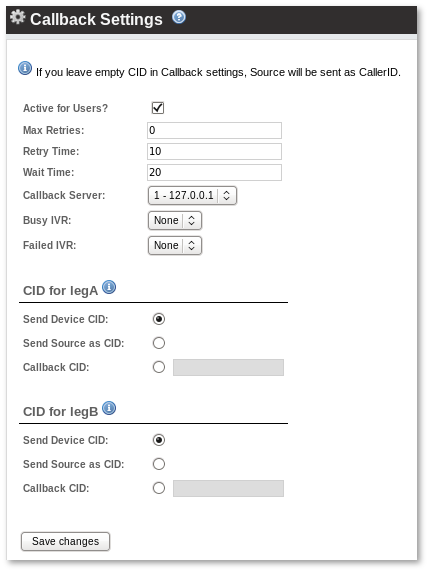 If Send Source as CID is selected an additional field 'WEB Callback CID appears. If it is left empty default CID will be used.

Callback in MOR is implemented in very simple way. It's enough to tell the system the Access Number (DID) and the way Callback should act. All of this will be described in following paragraphs.

Supported Callback methods in MOR, listed by initialization method (which triggers Callback), are:

Who pays for not authenticated call?

If system recognizes the User which initiates callback (using Calling Cards Pinless or ANI/PIN), then this User will be charged for Callback initiation call.

In order to keep track of Callback calls, you need to configure MOR in the proper way. For this we need:

Callback User is the user who will pay for answered but not authenticated calls to the user. 100% of the time, this user is the system owner. But creating a new user in MOR lets you keep track of all Callback activity in your system. The other reason to have Callback User (and not use the System Admin account) is the ability to create and assign a Callback Tariff to this user.

Callback Device is the necessary entity in MOR which will actually 'make' callback calls to user. The type and other details do not matter. This device is pure virtual.

Callback Tariff – a separate tariff which should be assigned to the Callback User. In this tariff you enter rates only to those destinations from which you expect the user will make an Initiation Call. This is important! Make sure you do not have some Inmarsat rates defined here. Guess how much you will pay if the user initiates a callback from Inmarsat and, when he gets the call, enters the PIN several times incorrectly and hangs up? In short, this tariff decides from which destinations you allow users to initiate callback.


Types of Callback in MOR

Callback in MOR can be classified three ways depending on how the user is authenticated/authorized:

The main part here is that user gets authenticated/authorized when he enters Device PIN. System checks for such PIN in database and if user is found – user can proceed.

This way of Callback is extended User auth. by PIN Callback. In order to ask user for Device's PIN system checks user's CallerID (ANI). If such CallerID is found in database – user gets authenticated/authorized and can proceed entering destination. If CallerID is not found – Callback is not initiated to User.

Attention! It is very easy to fake CallerID so be careful when you are enabling Callback with ANI. Anybody can put anybodies CallerID and use your service for free.


Callback By Calling Card's Number/PIN (or only PIN)

This type of Callback lets user enter Calling Card's Number/PIN to get authenticated/authorized. System checks for such Calling Card in database. If call is made – it is assigned to particular Calling Card.

Rule about Users and Cards:

Users and cards are not related at all. That means:

In order to setup Callback in the MOR you need:

The work flow is as follows:

Starting from MOR 10 you can change the Hangup Cause Code which will be used then dropping the call before calling back.

MOR supports these Hangup Cause Codes:

VIDEO: How to create Callback User

VIDEO: How to create Callback Device